Emma Watson who is well known as Hermoine Granger of Harry Potter series is now became famous as a beautiful Disney princess through her recent movie – “Beauty and the Beast.” So, we present you the whole information regarding her age, height, weight, body measurements, net worth, education, fitness, fashion, lifestyle, controversies, movies, personal information and many more things which you don’t know about her.

Since the years ended as Hermoine, Emma Watson has got her own voice as a U.N. ambassador and now she found a new identity as a classic Disney Princess in Beauty And The Beast. This movie became so popular in the entire world and Emma Watson wins the first Gender-Neutral acting prize at MTV movie awards for her role in Beauty and the Beast.

Everyone love her character as “Hermoine Granger” in Harry Potter series. But Emma is not only an actress but also a model and an activist.

Apart from the series of Harry Potter films, Emma developed her passion for fashion that was going smooth when she was selected as the newface of Burberry in 2009. And the same year she announced her support for Fair Trade Label People Tree.

Emma Watson is a British actress who born in Paris and brought up in Oxford shire, rose to the fame through her role in Harry Potter films. In 2010, Watson embarked her degree on English Literature at Brown University in America and spent her third year at Oxford University.

And in 2014, she was graduated and received her degree along with 2000 students from Brown University. She was completed her bachelor’s degree in English Literature.

Emma has been called as the “Voice Of A Generation.” In 2014, Emma was appointed as a UN Women Goodwill Ambassador and launched a campaign #HeForShe to helped the people.

Watson has been working hard and she gave a keynote speech on gender equality that successfully broke the internet.

As we all know that Watson appeared in all eight parts of Harry Potter series from 2001 to 2011 for which she earned worldwide fame, honor and around $60million.

And she has done many super hit movies like – This Is The End (2013), Noah (2014) and so on. And her latest movie “BeautyAnd The Beast” hit the cinemas after its releasing.

As a fashion expert, she creates a line of clothing for People Tree. In 2014, Emma Watson was honored by the BritishAcademyOf Film & Television Arts that she was winning for British Artist of the year.

Well, if we similarly, talk about Emma Watson then a book will be filled but Emma’s facts will not end.

That’s why here we are going to tell you some basic, personal, professional as well as interesting facts that you don’t know about Emma Watson. 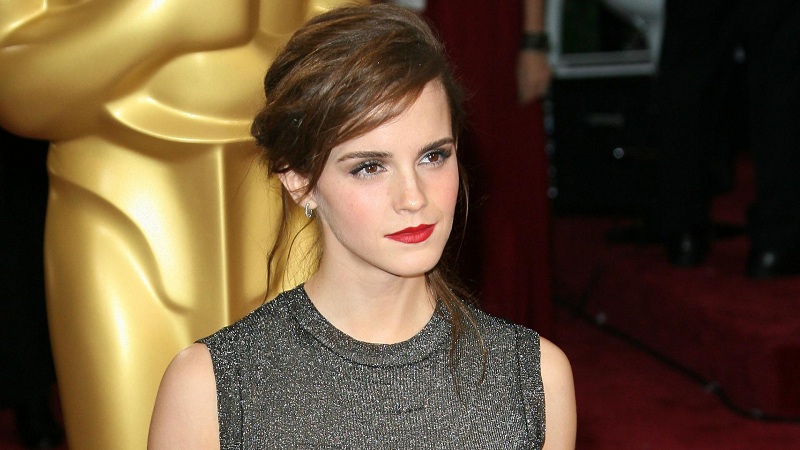 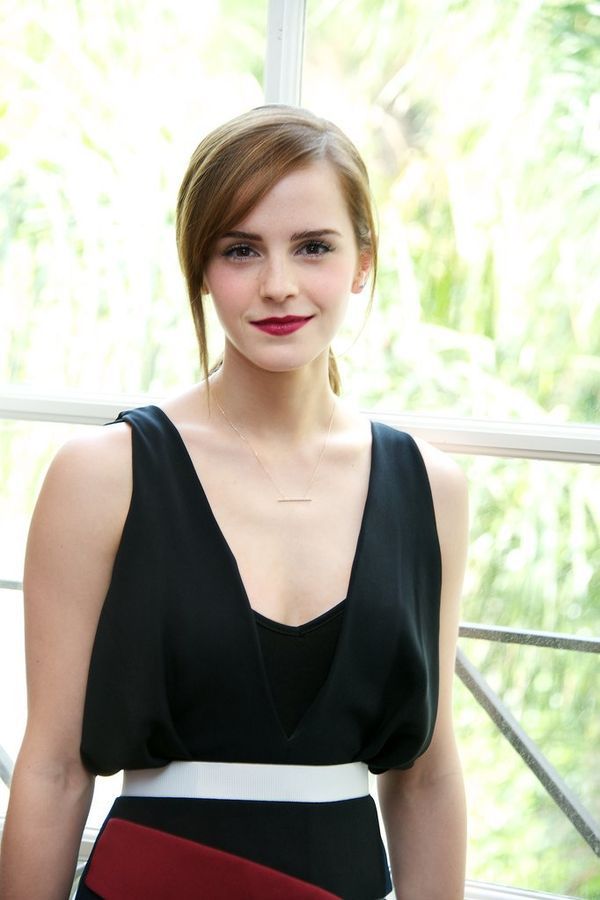 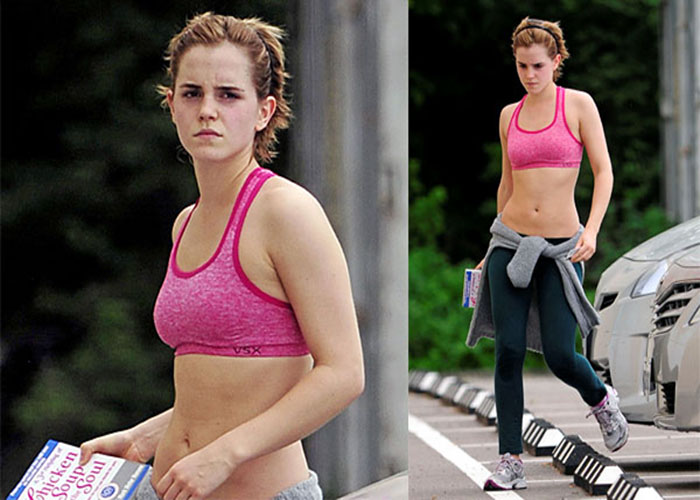 One of the biggest assets of Emma Watson is her great body, and looks, with which, she has won the hearts of millions of fans and have become the idol for many female fans in terms of health and fitness.
Now, let’s have a closer look at her exercise schedule.

Usually Emma love to play field hockey, go for hill walking and running outdoors. In short she loves to play sport that produces sweat, Emma never think about that playing hockey is unfeminine and after the game she finds herself very pretty with her pink cheeks & bright eyes.

She always prefers going to the gym and does at least 90 minutes of workout in a day. She has five days per week workout plan, which includes intense cardio including Pilates, weight lifting and sprints.

It will help to balance your core strength as well as increase flexibility. Due to this exercise Emma looks graceful and attractive.

Emma doing this weight lifting to make her bones stronger with a toned body. As well as it helps to boosts your metabolism that makes her physique great.

Sprint running is one of the best exercises to increase the strengths of your cardiovascular system and helps in burning calories that’s why Emma includes this exercise.

And it also helps to increases the muscle mass as well as stamina and works on your immune system too. Here are some key points of sprint running that are discussed below:

Emma always prefers to take a healthy diet which is low to saturated fats, salts and also avoids junk food. She also loves making food. According to her rules she does have some cheat days, when she includes chocolates, pasta, bagels at some time.

Accept this she has a well balanced diet with proper proportion of proteins, carbohydrates and fibers. She has includes fresh fruits, vegetables, lean meats and salads in her diet.

Matthew Janney [2014] – The Oxford University rugby player, Matthew Janney dated Emma for quite some time from January 2014 to November 2014.

Roberto Aguire [2015] – Mexican actor and producer, Roberto Aguire first met Emma on the set of Harry Potter and the Goblet of Fire, and they had an encounter in October 2015 when they spent half a day together. At that time, Roberto was an intern at the special effects department. 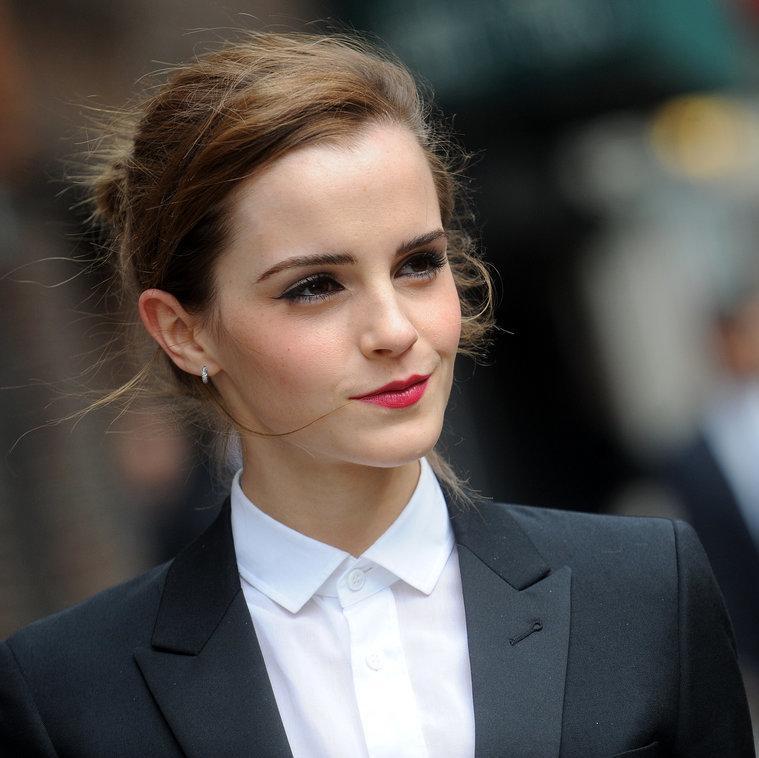 Emma Watson addresses a controversy over ‘Topless Vanity Fair Photoshoot.’ Actually in that photoshoot Emma was topless that’s why she involves in this controversy. 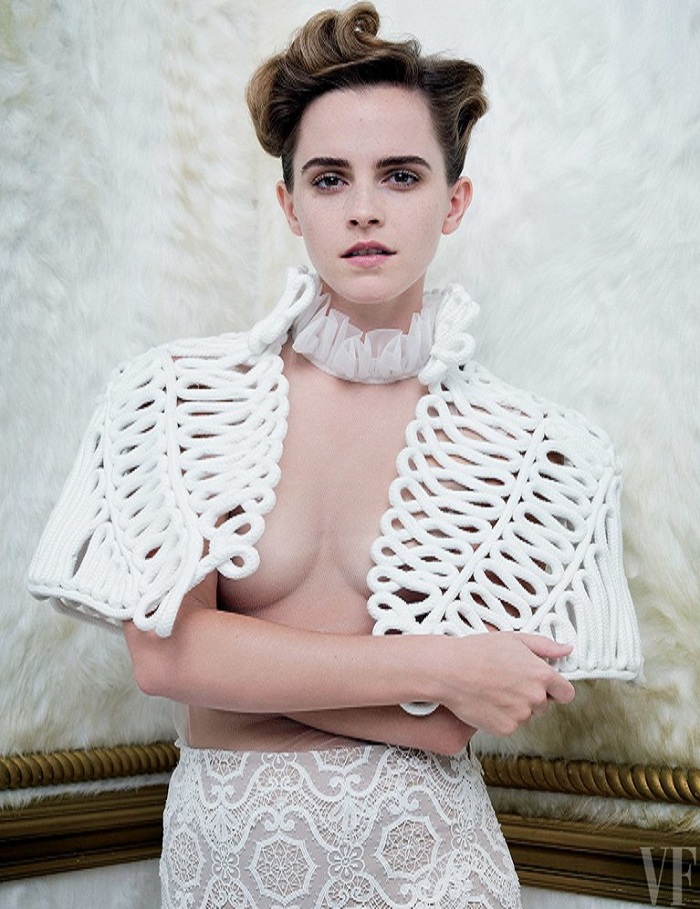 The photo shoot was carried out by admired fashion photographer Tim Walker in which Watson displayed in an open white crocheted bolero jacket with no bra or shirt underneath. You can see here that pic of Emma Watson –

But the actress Emma Watson hit back at critics who have been commenting either in the press or on Twitter that a photo of her in the latest Vanity Fair magazine isn’t “feminist” as she bares part of her breasts.

Watson, who is a UN Women Goodwill Ambassador and pioneer of the #HeForShe campaign to make men advocate for feminism, talked about the controversy while promoting her latest film, the Disney live action “Beauty and the Beast.”

So, she said during an interview with Reuters that​ –

It just always reveals to me how many misconceptions and what a misunderstanding there is about what feminism is?

Feminism is about giving women choice, feminism is not a stick with which to beat other women with—it’s about freedom, it’s about liberation, it’s about equality. I really don’t know what my tits have to do with it. It’s very confusing.​

And she added that – The shot itself I was honestly slightly taken a back by, because we’d been doing so many crazy things on that shoot, but it felt incredibly artistic and I’ve been so creatively involved and engaged with Tim and I’m so thrilled about how interesting and beautiful the photographs were. But yeah, certainly people have asked and I’ve gone ‘Is there a controversy about this?

Here we are providing you the social media account’s links of Emma Watson where you can follow her and like her latest pictures and stay connected with her socially and updated with her new activities. Check out the links-